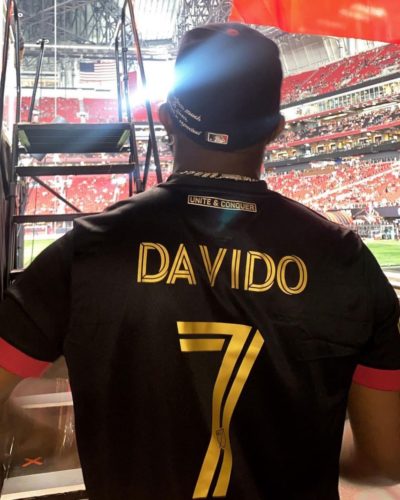 David Adeleke, professionally known as Davido, has set a new record as the first African artiste to hit the Atlanta golden spike.

The Atlanta golden spike references the ceremonial final spike fixed into a railroad track after it has been laid.

As a railroad state in the US, the hitting of the golden spike is a tradition which occurs before the start of matches played by the Atlanta Football team, Atlanta United FC.

Davido, born in Atlanta to Nigerian parents, was given the honour on saturday night, and, according to goal.com, became the first African artiste to perform the tradition.

Other artistes who have been honoured to hit the golden spike include rapper 2 Chainz, Yung Joc, Waka Flocka, country musician Zac Brown, and others.

Wearing a jersey of the team, customised with the letter 7 and his name written in gold, Davido shared the video of himself hitting the spike with fans cheering on his Instagram stories.

The game which held at the 70 thousand capacity Mercedes-Benz Stadium Atlanta was also attended by American rapper and Atlanta native, Kanye West.