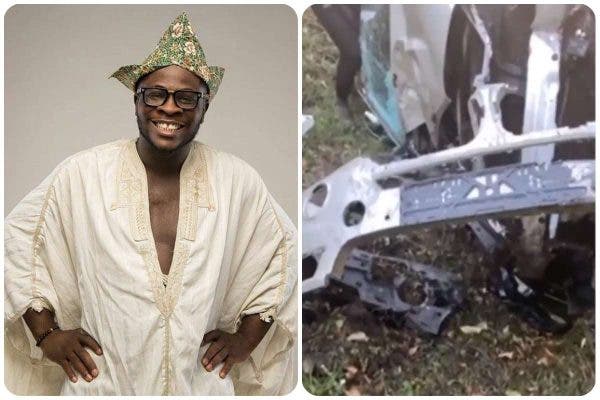 Popular Instagram comedian, Emmanuel Iwueke popularly known as Craze Clown, has opened up about what happened during the car crash he was involved in.

He revealed someone died in the ghastly crash.

Taking to social media yesterday, the popular comedian had shared a shocking video of a mangle car, which he revealed was the one he survived.

According to him, the ghastly crash occurred on his wife’s birthday which was yesterday October 26. Sharing the video Craze Clown wrote on social media;

“GOD!!!! you saved my life on wife’s birthday! will tell the story later! But for now just help me Thank GOD! #gratefulHeart”

He has now given an update on the crash, as the Ukrainian trained medical doctor turned comedian said someone died in the car accident.

“My people I have no words people … I want to talk but only ‘THANK YOU JESUS’ keeps coming out of my mouth! Somebody died in this accident! I saw my life flash before my eyes! I already accepted my fate but GOD SAID NO!!! ” he wrote.

“This song says EVERYTHING for me! THANK YOU JESUS 🙏🏾🙏🏾 PS: Thank you to everyone reaching, I’m okay just a dislocated wrist, neck, and bruises but I’m ALIVE!”

Craze Clown has not revealed the identity of the person who died during the car crash.