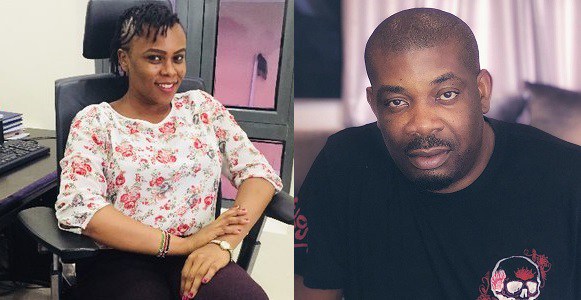 So after Don Jazzy went on a Money sharing spree few days ago on Twitter, a lady who goes by the name Ify Solanke, was touched by this gesture and revealed how the Singer imparted her life and helped her become a successful Lawyer.

According to Ify Solanke she had a Project in school and Don jazzy without pride despite his Celebrity status helped her and saw her through.

She revealed that she is now a barrister and she is ready to reciprocate all the assistance she has gotten from the Mavin Boss.

Read her tweets below:

Seeing @DONJAZZY ‘s tweets has brought back memories of what he did to me Issa thread guys!!!

“So sometime in April 2013, one of those nights when I randomly tweet, I dunno what I tweeted that got his attention, but he followed back.

“I was happy… 20year old, somebody wanna be, being followed by arguably the best music producer in Nigeria.

“So on my 21st birthday, I sent a dm for a shout out and he did. I don’t think he was dashing money at that time, 2014 or so. I wonder why all I wanted was a shout out. #Iwasafan

“He obliged me without responding to the dm and that meant a lot as well.

“Fast forward to 2015… I picked an interest in Intellectual Property Rights… Btw, I was in final year, faculty of law, Uniben. I selected a topic in IP for my Project…

“The topic was, ‘Protection of Copyright Works in the Entertainment Industry ‘.

“I was to review the music and film industries, show how their works qualify as copyright works, how well they are protected, especially on the internet.

“I reached out to @DONJAZZY and a few other musicians with questions on how they protect their works online, whether they just give music downloading sites their songs.

“He explained to me that that was pretty much what they do and he agreed that there were no laws protecting media contents online, so they could not enforce the infringement of their copyrights online.

“It was pretty much a case of sacrificing their rights onthe altar of fame… Well, look how it paid him. But then we know, all fingers are not equal.

“I looked further to discover that the rights of the musicians can be protected by Collecting Societies (with COSON) being the extant body.

“Musicians get paid through the Collecting Societies for the use of their works by radio stations, tv stations, for adverts and the likes.

“So I finished my project, referenced @DONJAZZY in it and got a B. I still owe him a copy of that project…

“But I should let him know that I am a Lawyer now and can help enforce or defend his rights. LPDC please stay outta this

“So, Mr. Michael Collins, you have a lawyer here and if you ever need a firm of lawyers to retain, I can guide you aright. In conclusion guys…

“If there is a celebrity I know that is steady in his doings, it is Don Jazzy. Witty, funny, kind and human.”