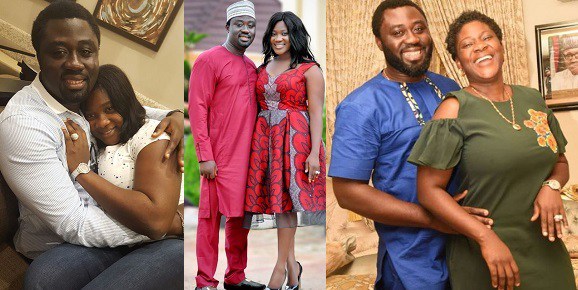 Popular Nollywood actress, Mercy Johnson-Okojie, recently lost her mother, and her friends, fans and well-wishers joined her in mourning her late mum.

However, it seems that the wife and mother 0f three is yet to get over the death of her loving mother and this is telling on her husband’s daily activities.

The actress’ husband, Prince Odi Okojie who could no longer suffer over his wife’s grief alone took to his Instagram handle to reveal how much he misses his wife.

He made this known while responding to a fan’s question on Mercy Johnson’s sudden weight loss.

He shared a video of his beautiful wife who wanted to visit her friend and clothier, Hope Fashion because it was her birthday, adding that it was the first time she would leave the house ever since her mom’s death and he was happy to step out with her.

His post reads: “Wify isn’t herself yet, she’s still trying to heal after moms death. She asked to see @h.o.p.e.fashion today since it’s her birthday so I had to support her. I want my playful bestfriend/Wify back ooo. HBD Kiki. She holds you so much.”

Hope Fashion whom the actress visited, was obviously happy and wrote; “#Repost @h.o.p.e.fashion And I couldn’t believe this, Mercy @mercyjohnsonokojie my blood u came all the way even though you weren’t feeling well, ha you didn’t just send Cake but you came all the way……when they said Mercy I couldn’t even believe it, this is so special to me @princeodiokojie out of your busy schedule u made time for me words fail me and I will never forget this kind gesture.”