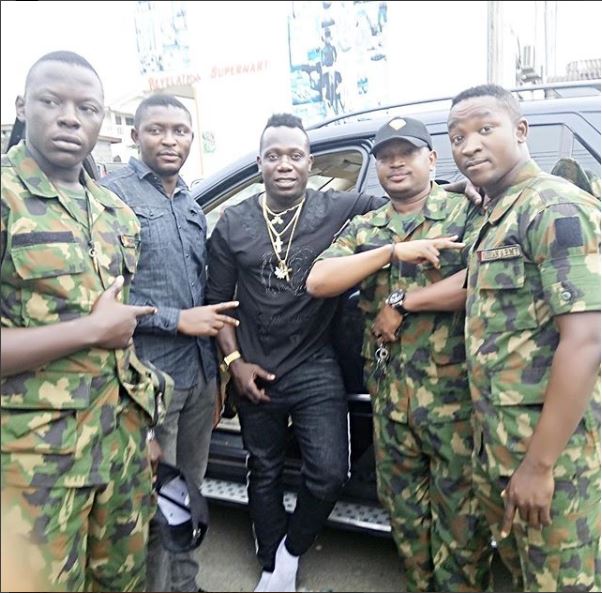 Popular Nigerian singer, Duncan Mighty, has been called out on social media after he tried insinuating that he is an ex-student of the Nigerian Military School.

Duncan Wene Mighty Okechukwu popularly known as Duncan Mighty, a Nigerian singer, has been called out by former students of the Nigerian Military school, Zaria, for claiming to be an alumnus of the school, precisely 1993-1999 set.

It all started after the singer shared a photo of himsef with some men in military uniform and captioned it:

However, soon after the post, ex-students of NMS trooped to his page to drag him for claiming to be a former student of the school.

”Impersonator claiming to be what you are not, and this junior clowns are there misbehaving”. one ex student wrote.

The matter didn’t end there as the NMS class of 99, went as far as putting out a press release on their official instagram page to further distance themselves from him and request that Duncan Mighty ”desist from posing as an alumnus for whatever reasons or benefits known to him”

Read the press release below:

PRESS RELEASE: DUNCAN WENE MIGHTY OKECHUKWU IS NOT AN EXBOY!

In response to the outrageously false allegations posted on the 2nd of July 2018, by one Duncan Wene Mighty Okechukwu simply known as Duncan Mighty via his Instagram handle @duncanmighty

The Nigerian Military School Class of 99 (Also known as NMS93) would like to express it’s disappointment with Mr. Duncan Wene Mighty Okechukwu’s claims and issue the following statement to the media and to the public.

1. Duncan Wene Mighty Okechukwu was never a member of the NMS Class he claims in his Instagram post which has since gone viral on social media platforms and the internet at large.

2. He was never a boy/student of Bravo Company.

3. He has never attended either academic or military trainings as required for a student of the Nigerian Military School,

4. He is not an Ex-Boy (By definition and implication, an Ex-Boy is an individual who was admitted, successfully completed required military and academic trainings and with merit graduated from the Nigerian Military school with a testimonial credential signifying same)

5. He is no course mate of any genuine member of the graduating class of NMS99 also referred ceremoniously as The 41st Passing Out Platoon.

The NMS93 Alumni Association humbly requests that Mr. Duncan Wene Mighty Okechukwu desist from posing as an alumnus for whatever reasons or benefits known to him.

The association would also like to register its displeasure with the photographic images of Mr. Duncan where he appears in military camouflage with the service rank of Captain while not well groomed and wearing earrings.

While his intentions might be for good and not self-serving, from our perspective we insist that posing as a soldier albeit an officer is “a disservice to the proud men and women of the Nigerian Armed Forces, who earn the right to wear their uniforms for the hard work and sacrifices made for our country.” The association warns that anyone relating with Mr Duncan Wene Mighty Okechukwu, under the impression that he is an alumnus of NMS99 does so at their own risk. *Please continue in the comment section*

The association however welcomes his interactions with genuine members of our Alma Mater and by large the military community of which we are also related to and wish him well in his endeavors.
Accept the warmest regards of the association.