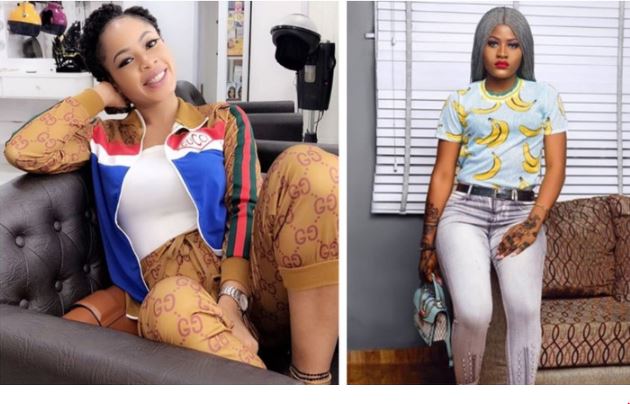 It seems all is not well former Big Brother Naija housemates Alex and Nina as both seemed to have subtly shade each other in different post on Instagram.

This all started when Alex shared a photo of herself rocking a Henna hand dye on her timeline which is quite similar to a style Nina previous rocked and shared on her page.

One of Nina’s fans who didn’t seem to be fine with the design on Alex’s body called her out and asked if she has to copy everything that Nina does.

“Must you copy? Copying nina tattoo will not make you fine, smh”.

Then Alex fired back at the fan:

“Bla ewu ah, first off it’s not a tattoo. Second of all, it wasn’t made for anybody in particular as many people have done it before and will still do it, third of all, lunatics are not allowed to comment here, I can hear your doctor call. It’s time for your medication. Now run along and play with sand.”

“You will tell me when nina invented henna. (bia did I spell it well biko?) Anumpam.”

One of Nina’s fans must have notified her on the mention or she spotted it herself. So in her response she took to her InstaStory and requested that no one should mention her name in their problems.

We are patiently waiting for where this Instagram war between two beauty queens will lead to.