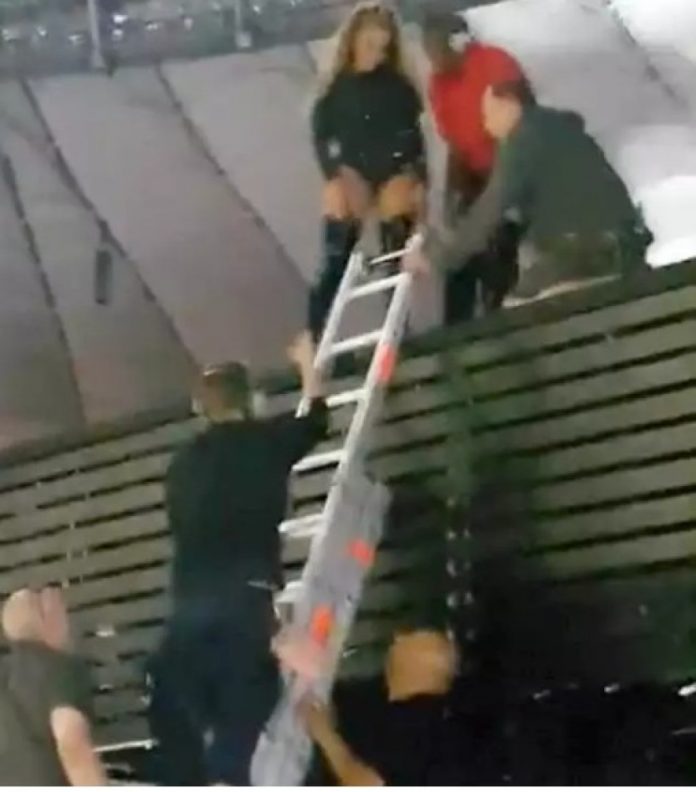 Beyonce nearly LOST HER LIFE last night – as a stage malfunction left her stranded 20 feet in the air. She had to be rescued by members of the local FIRE DEPARTMENT.

Bey was supposed to fly across the crowd on a “flying stage” and it malfunctioned – first JERKING back and forth – nearly tossing Beyonce. Then the stage got STUCK. Eventually local fire department members – who were there on standby – used a ladder to RESCUE the Queen Bey.

The incident happened at her latest concert appearance in Warsaw Poland.

But Bey was clearly SHAKEN by the entire ordeal. Her fans tried to encourage Bey to go down the ladder – but Mrs Carter was SCARED. She was initially reluctant to use the ladder.

Eventually Beyonce decided that she had no other way down – but to use the ladder. The multi-platinum artist carefully descended the ladder without falling. She was visibly ANNOYED by the way that the stage show messed up.

But Bey is the consummate professional. Despite nearly DYING – she gave the fans their money’s worth. Bey continued the show like if nothing happened.

CLICK HERE IF YOU CAN’T PLAY THE VIDEO BELOW;