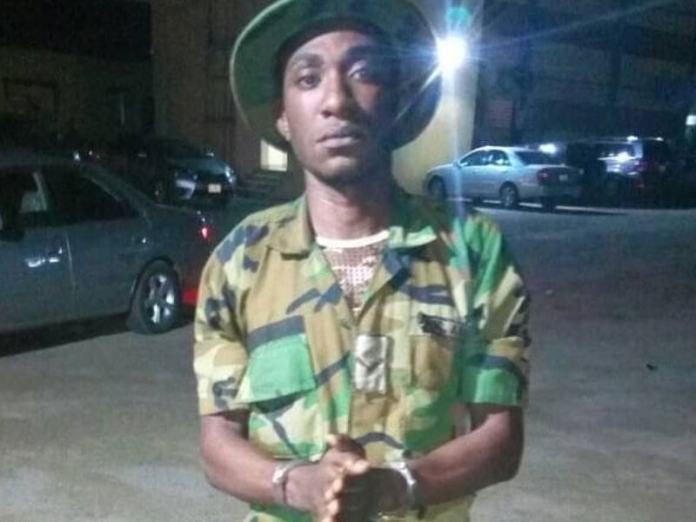 The suspect, Lance Corporal Victor Chukwunonso, a soldier of the Nigerian Army with force No: 09/NA/64/6317, was arrested by the Intelligence Response Team (IRT) of the Nigeria Police.

According to Thisday Newspaper reports, Chukwunonso as he is fondly called is a serving Army Personnel who is a gang member of Evans, the most notorious kidnapper in Nigeria.

The report reads thus: “Sequel to the arrest of Evans in his Magodo GRA Mansion in Lagos on June 10 and six his gang members, his (Evans) confessions has helped.

“He mentioned multiple kidnappings, armed robberies and collection of billions of naira as ransom and mentioned his remaining gang member at large including an Army Personnel, a serving Lance Corporal in the Nigeria Army, L/Cpl Victor Chukwunonso with Army No: 09/NA/64/6317.

Attached to Nigeria Army Band Corps Abatti Barracks, Surulere, Lagos, he is a native of Onitsha, Anambra State and he was arrested by IRT at about 7.pm at the Ojo Area of Lagos.

“Corporal Victor confessed to have followed Evans for kidnapping in Lagos State 3 times where he got N2million, N1.5million and N3 Million naira respectively as his share. Serious efforts to arrest remaining gang members are in Progress.”

Given the rich repertoire of information to be gotten from Evans on what made his syndicate thrive for over seven years, it was gathered that the police was not in a hurry to arraign him in court.


According to the police, his revelations would assist police in bursting several kidnap cases in the country and those behind it.

Acting Commissioner of Police, Lagos State command, DCP Dasuki Galadanchi, who addressed newsmen saturday in Lagos, said more suspects have been arrested in connection with Evans and his gang.

Although Galadanchi could not disclose the identity of the arrested suspects, the story of the fresh arrest pointed to the soldier.

Galadanchi noted that since Evans activities are legendary, there was need to painstakingly investigate the matter before he would be charged to court.

His said, “There is need to painstakingly investigate this matter. Evans has been a kidnapper for a long time and has been on the wanted list of the police in Edo, Abuja, Anambra and Lagos States.

“He has a criminal gang. Some have been bursted in Enugu. We need to understudy and debrief him and use all his acts of criminality for innovation on how to curtail others.

“Eventually, he will be charged to court after investigation is concluded. Other suspects have been arrested after those with him.”

READ ALSO! 7 Women Lure Two Men Into Their Car, Rape Them Serially Inside A Bush

READ ALSO! OWERRI ROBBERY: Nigerian Police Under Fire For Disparity In Their Claim Versus The Viral CCTV Video