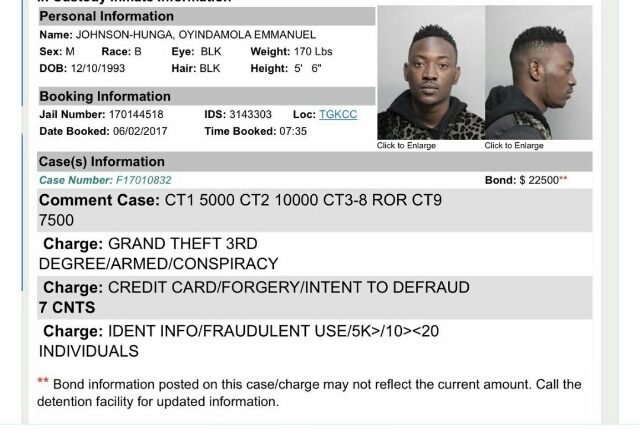 (NAN) Seven fake credit cards were found in the pockets of Dammy Krane on 1 June when he was arrested at Opa-locka Executive Airport in Miami Dade, Florida.

Dammy Krane’s trouble began after he used a bogus card to book a private jet flight to Washington, D.C., police said. When the police searched him, they found seven false credit cards in his wallet, according to the police report, details of which Miami New Times published today.

Agents from the mobile-phone booking app TapJets had called police, when they found that the first card Dammy Krane tendered was bogus. The jet company told Miami-Dade Police that Krane and a partner, Chukwuebuka Ilochonwu, had booked a $10,943 trip on a jet from Opa-locka to Washington, D.C.

Krane lists a permanent U.S. address in Baltimore on the police report, according to the report by Miami New Times.

Two MDPD officers staked out the jet runway until Krane and Ilochonwu showed up. Police searched the pair and found seven cards in Krane’s pants pocket. When authorities checked the cards later, all seven had numbers on the face that didn’t match the numbers on the security strip on the back.


MDPD says Krane used one of those cards to book his flight and then gave TapJet two other fake cards when he was asked for backup cards for the travel.

His co-defendant, Ilochonwu, police soon learned, was out on bond on four other credit card fraud charges.

He’d been arrested in April on felony charges stemming from a case in Miami Beach.

Dammy Krane who is now out on bail has tried to exculpate himself from the arrest mess, blaming “agents” and assuring fans he’s innocent.

“My life is all about my music, and that’s what I’m all about,” he says. “I’m sorry I got caught up in this mess.”

The Benue-born Krane rose to fame five years ago on the success of his hit single “My Dear,” He became a major player in the Afropop scene, with a quarter-million followers on Twitter and regular chart-topping hits.