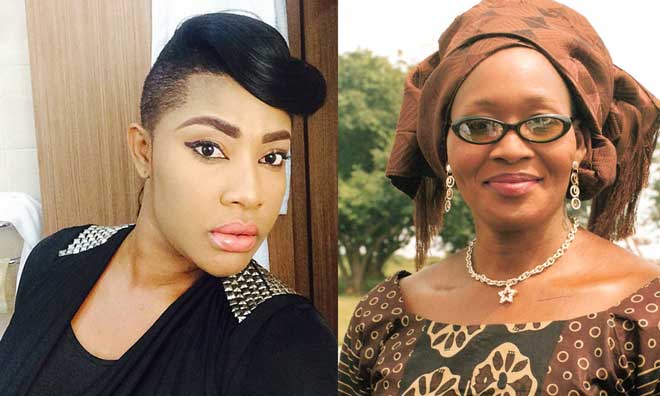 Olunloyo known for her love for altercation, has disclosed how the actress got a share from the alleged $11m the immediate past president of The Gambia, Yahya Jammeh ‘stole.’


Ms. Olunloyo lambasted the actress for ‘prostituting’ in the movie industry, and outside the shores of Nigeria.

Recall that an aide to the newly inaugurated President of The Gambia, Adama Barrow, Mai Fatty, had accused the ousted leader of stealing the said amount and shipping out luxury vehicles by cargo plane although, he has since denied the allegation.

But Ms. Olunloyo has disclosed how the ‘bleaching’ actress was ‘paid $1.5M to wear white Muslim dictator shit garb to campaign for an alleged evil man – Jammeh.

The Snitch Lady exposed her after she, Angela, insulted inter-sexual cross-dressing, bleaching advocate, Bobrisky and advised ladies not to date men who wear makeup.

READ WHAT Olunloyo Wrote about the actress On her Instagram page @HNNAfrica:

“The depth of high class prostitution of our #Nollywood ladies has reached alarming heights.

“While #AngelaOkorie fans are busy yapping me for calling her a call girl, they don’t understand my form of investigative journalism. No fear, favors or bribes.

“Okorie has been fucking a dictator in front of our eyes and could have possibly been a diplomatic nightmare that ECOWAS secret agents could have easily eliminated.

“If she were #American, the CIA would have KILLED her already! A total #Nigerian embarrassment to @muhammadubuhari’s #ECOWAS mission.

“I caught and monitored Okorie’s philandering with #yahyajammeh from the beginning of the elections that eventually earned #AdamaBarrow the Presidency.

“Instead, Okorie was on Instagram brainwashing her fans as usual calling Jammeh “a man of the people.”

“Angela once again after u were insinuating thunder will fire @bobrisky222, I repeat….the thunder that will fire u is coming straight from #Gambia from all those #Gambians who are refugees in #Senegal now suffering and trying to go home.

“Instead you conveniently flew back to #Nigeria and watched a dictator refuse to give up his throne after he paid u.

“A prominent #Gambian Journalist told me you were paid $1.5M to wear white Muslim dictator shit garb and rock your pussy around campaigning for an evil man.