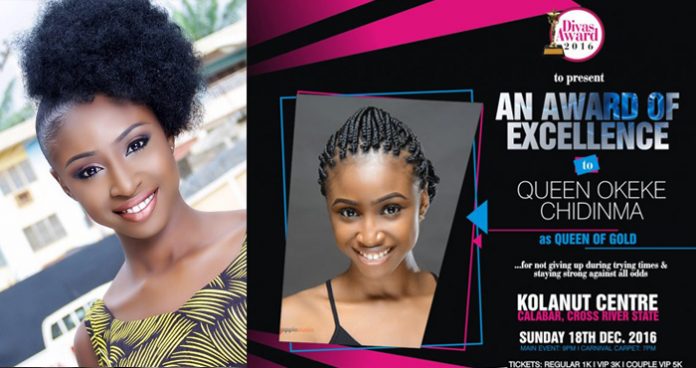 Embattled ex-beauty queen, Chidinma Okeke, has been awarded by the Organizers of Miss Diva Awards despite her alleged leaked sex tape which has been making headlines in the internet for weeks now.

Explaining why they chose to honour her, the organizers said, “Chidinma didn’t have to meet any criteria to receive this award. It was solely the decision of the brand to honour her,”

The project coordinator of DIVA Queens award, Chijioke Awugosi “Mr. Decency”, said “We are aware of the controversy that will come with it. But we hope that in due time, every well-meaning and reasonable individual will see the reasons behind the award.”

“We chose to stand with Chidinma right till the very end. We’ll give her every support we have at our disposal; morally, psychologically, legally. She is an icon and through her we can reach out to thousands of girls who have or are on the verge of being sexually exploited. It is a civilized world, we shouldn’t be so judgmental,” he said.

It will be recalled that earlier in October Ms. Okeke, the former Miss Anambra 2015 allegedly got her sex videos leaked on the internet showing her having sex with her female personal assistant.

In her defense, she denied at first claiming her face was superimposed but a second video was released showing the ex-beauty and her P.A. in a more sordid scene, inserting a full cucumber fruit into their private parts.

It is reported that a third one-hour sex tape of the ex-beauty queen containing more graphics than the first two might be leaked by the supposed source in retribution for Ms Okeke refusal to hold up her end of the deal.

Some are of the opinion that it is disgusting to honour her, while others feel the award is right and needful to avoid a case of her being forced to suicide with with the hashtag #istandwithChidimma.